« Back to search results 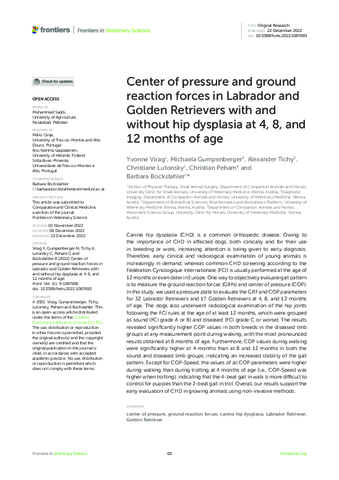 Center of pressure and ground reaction forces in Labrador and Golden Retrievers with and without hip dysplasia at 4, 8, and 12 months of age

Canine hip dysplasia (CHD) is a common orthopedic disease. Owing to the importance of CHD in affected dogs, both clinically and for their use in breeding or work, increasing attention is being given to early diagnosis. Therefore, early clinical and radiological examination of young animals is increasingly in demand, whereas common CHD screening according to the Fédération Cynologique Internationale (FCI) is usually performed at the age of 12 months or even older in Europe. One way to objectively evaluate gait pattern is to measure the ground reaction forces (GRFs) and center of pressure (COP). In this study, we used a pressure plate to evaluate the GRF and COP parameters for 32 Labrador Retrievers and 17 Golden Retrievers at 4, 8, and 12 months of age. The dogs also underwent radiological examination of the hip joints following the FCI rules at the age of at least 12 months, which were grouped as sound (FCI grade A or B) and diseased (FCI grade C or worse). The results revealed significantly higher COP values in both breeds in the diseased limb groups at any measurement point during walking, with the most pronounced results obtained at 8 months of age. Furthermore, COP values during walking were significantly higher at 4 months than at 8 and 12 months in both the sound and diseased limb groups, indicating an increased stability of the gait pattern. Except for COP-Speed, the values of all COP parameters were higher during walking than during trotting at 4 months of age (i.e., COP-Speed was higher when trotting), indicating that the 4-beat gait in walk is more difficult to control for puppies than the 2-beat gait in trot. Overall, our results support the early evaluation of CHD in growing animals using non-invasive methods.

This work is licensed under a
CC BY 4.0 - Creative Commons Attribution 4.0 International License.

Member of the Collection(s) (1)